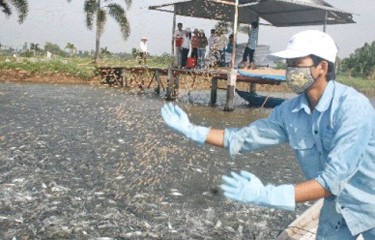 Vietnamese pangasius companies reported strong growth in the first half of 2022 thanks to high demand in global markets. But rising costs, mainly due to inflation, are making providing local farmers with a tough decision as to when and whether to restock their ponds.

Overall, Vietnam had a total farming area of 3,105 hectares devoted to pangasius in the first six months of the year, up 1 percent from the first half of 2021; with a total production volume of 771,430 metric tons (MT), up 6 percent year-on-year, according to Vietnam’s General Department of Fisheries.

However, VASEP has precited the pangasius exports in the third quarter of 2022 are unlikely to maintain the same pace of growth, mainly due to the impacts of high inflation in global market. High inflation isn’t just impacting prices at the consumer and foodservice level, VASEP said – it is also affecting pangasius farming activities in Vietnam due to higher feed and other input material prices.

Vietnam Pangasius Association Chairman Duong Quoc Nghia told local media in July that despite a rise in prices, pangasius farmers are incurring losses due to the increase of feed prices and other costs. The production cost was nearly VND 30,000 (USD 1.29, EUR 1.26) per kilogram, which is higher than the farm-gate prices. Nghia said the losses have discouraged many farmers from restocking.

Truong Van Dien, the former head of an aquaculture cooperative in Dong Thap province, warned that if local processors fail to increase purchase prices, it is likely that the sector will face a shortage of material pangasius for processing, as farming acreage won’t be expanded, VnExpress reported.

“The information is true. Pangasius farmers get loss from their farming operation so they hesitate to stock again. Current pangasius material price is lower than farming cost,” Oanh told SeafoodSource.

Oanh said prices for pangasius feed have increased by between 15 percent and 20 percent so far this year.

An Giang Province Fisheries Department Director Tran Anh Dung said the cost of feed accounts for between 75 percent and 80 percent of production costs. But with prices of pangasius fingerlings and other input materials for farming also rising significantly, overall production costs have increased 35 percent compared to last year, he told newspaper Tuoi tre.

Dung said pangasius prices have cooled in July, down from VND 32,500 (USD 1.40, EUR 1.37) per kilogram in May 2022. This was due to the lower demand from Chinese buyers. If that trend continues, it may lead to a further decline of prices and will continue to discourage farmers from stocking, he said.

Local producers have raised the price of feeds for various seafood species in June and July, a local feed producer told SeafoodSource. However, the prices of feed for pangasius have not been adjusted recently, a sign that potentially shows demand for pangasius feed has slowed.

Despite these signs, Oanh said China’s recent decision to end COVID-related import restrictions on seafood from Vietnam will help the market recover, with prices possibly increasing, as China is currently the largest market for Vietnam’s pangasius sector.

Nghia also remained optimistic about the opportunity for the sector to reach a record export value of USD 2.6 billion (EUR 2.5 billion) this year, which would represent a 61.5 percent boost from 2021. He said his association is encouraging local farmers to join aquaculture cooperatives and work with pangasius companies in their supply chains to avoid adverse impacts of rapidly changing market conditions.