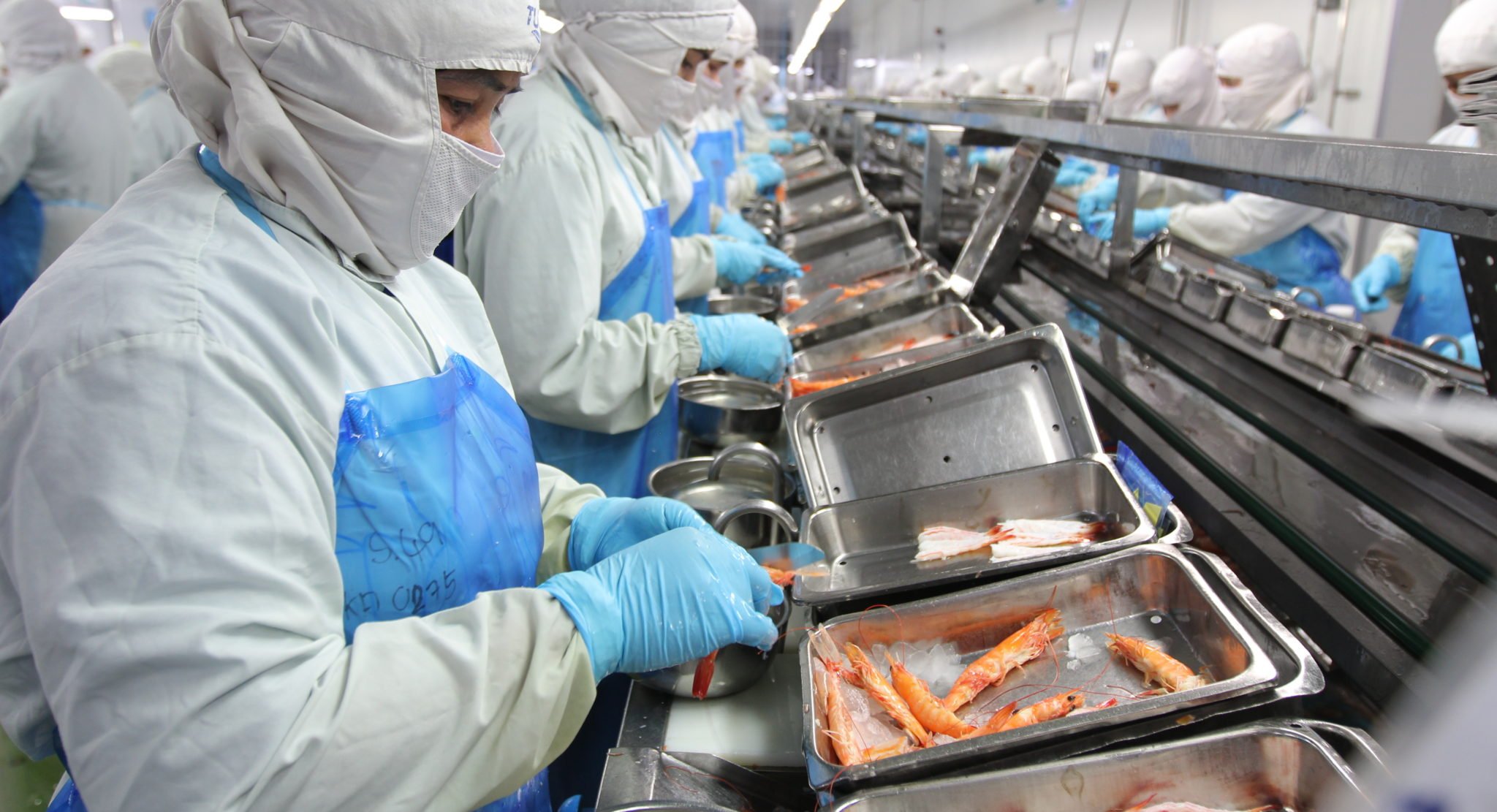 Executives at CP Foods, Thai Union, Sea Wealth and Siam Canadian all told Undercurrent how the country has made a significant shift away from commodity product this year

BANGKOK, Thailand — Wandering the crowds at this year’s Thaifex Anuga Asia show in Bangkok, one is confronted with a bewildering array of shrimp products, whether frozen, battered, cooked, added to pork, or even served in a wonton.

The mood among processors at the show is clear: where shrimp is concerned, bigger is better, and shrimp battered or processed into a ready-meal is better still.

“The market for commodity shrimp is shrinking a lot, so that’s why we’ve put even more effort on building the market for this kind of thing, the value-added,” Wannasiri Laosirichon, marketing director at seafood processor and trader Sea Wealth, told Undercurrent News at the show. “Whatever the customer wants, we try to convert the homemade product into the industrial product.”

“Raw shrimp is something that Thailand does not really do much anymore.”

This year, the country is looking once again at vannamei production in the region of 225,000-240,000 metric tons, according to Jim Gulkin, CEO of international seafood trader Siam Canadian.

“There’s really only a few processors who are still in the export business compared to many years ago. The cost of production in Thailand is very expensive compared to other countries like India or Indonesia or Vietnam, certainly Ecuador,” he told Undercurrent at the firm’s Bangkok-based head office.

“So Thailand, in terms of being able to compete in what was traditionally its biggest marketplace, the US, has been very difficult this year; it has been probably the worst so far in terms of selling to US and Canadian markets.”

As a result, there is an intent around the country to double down on more processed products, where the raw material price has less of an impact on the final profits.

The market conditions are not the kindest at present either. Over the past couple of years, Ecuador has begun selling far more raw material to the US after multiple exporters found themselves blacklisted by the country’s traditional market, China.

As a result, commodity prices are reasonably weak at the moment, considering the rampant inflation shown by other seafood products, he said.

“If China remains stubborn, then I think prices are going to remain fairly weak for the rest of the year,” said Gulkin. “I don’t see any massive drop in pricing, but I don’t see any real support for pricing either this year.”

Among the executives of the country’s two largest shrimp producers, Thai Union Group and Charoen Pokphand Foods, there remains no shortage of belief that the market remains solid. The shift to more value-added, finished product out of Thailand was already taking place, they believe – recent years have only accelerated this.

“Thailand is going to target more of a niche market,” said Rittirong Boonmechote, president of global frozen business at Thai Union. “I think we have to change because we don’t want to try in the [commodity] market, because that is not the direction we want to be in. We don’t want to compete only headless or head-on with other countries.”

“I think at Thai Union we are very lucky, our customers worldwide are happy with our quality of service and consistent supply,” he continued. “In the past, they look for who offered the cheap price, but now most of the buyers in the US, Europe and Japan are very interested in supply, not only shrimp, everything: who is the most reliable supplier?”

Boonmechote also believes that Thai Union’s traceability guarantees have also helped to set it apart from competing suppliers in other countries.

“For shrimp, we are planning steady growth again this year, up 10-15% from last year. For our top line, we are looking at selling more than $500 million.” Shrimp comprises roughly 3540% of Thai Union’s business, with a further 45% of its sales generated from tuna, Boonmechote estimated.

As previously reported by Undercurrent, it’s a similar story at CP Foods this year.

“For our shrimp, even the baby shrimp, we have been developing the size significantly,” CEO Prasit Boondoungprasert told Undercurrent at the Thaifex show. “There’s not much shrimp that you can grow to a big size, but with our shrimp, they can grow to about 20 pieces per kilo.”

What this means is that CP Foods is now selling shrimp to the US with an average size of 25 count, which this year he expects to drop further to 23 pcs/kg.

“That’s our market. We’re not going in with small shrimp, we could not fight with Ecuador in the US because they are so close to the US and their logistic cost is so cheap. That’s why we go for the big, premium ones.”

Inflation a headache for everyone

Of course, even if companies can retain their overseas market, all of them are fighting rising production costs across the board.

“For example, gasoline during the last three or four years it went up to $400 and then dropped to $20, and now back to $100,” explained Boonmechote.

“One of the other key factors that drive farmer costs is feed. Feed is composed from wheat, which also now is impacted from last year and from Ukraine, which had 15-20% of the world’s wheat production. Then they had a war and that clearly had an impact.”

“It’s everything: the oil, the ingredient cost, the freight cost, the packaging cost,” she told Undercurrent. “So this is something that we try to adjust with our customers, but there’s a certain limit. It’s not like we can say ‘we want this price’ so we then get that; we try to help each other.”

“At the same time, the customer has to accept the reality that this is happening; the ingredient companies, for example, have just announced a 20% increase in the breading system, it’s uncontrollable. And it’s not just a seafood product that’s pricey — it’s every other protein too.”

Boonmechote also admitted that cost hikes have not been fully passed on to consumers just yet. “For example, if it increases 20%, we can target 10%, so step-by-step,” he said. “Right now with
some products we’ve passed on 3-5%, other products to 10%, it depends. But the most important thing is we have to keep them [buyers]; if they cannot survive, we cannot survive.” What this means is that growth plans, and indeed new deals, are largely on hold this year. For Thai Union, CP Foods and others, it’s a year to be tightening purse strings rather than opening them.

“It’s a tough time for processors in Thailand,” agreed Gulkin. “You have higher raw material prices, you have much higher labor costs, and Thai minimum wages will be going up in September. It’s more difficult for sure.”

Given the high purchasing power now available to many Middle Eastern countries amid the soaring demand for oil this year, it is perhaps little wonder that many of the exporters at the show were looking to Saudi Arabia and its neighboring states for new business this year.

“We just got into Saudi Arabia, with more coming, but we have to get more approval from their authorities,” Sea Wealth’s Laosirichon told Undercurrent. Thai Union’s Boonmechote also confirmed the company had an interest in the region.

“Of course, we are focused on our current market, but for other countries, we think maybe in the future we could try the Middle East. The Chinese market is also very uncertain right now; in the last two years, they open, they close, they open, they close… right now they’re starting to open again so we’ll have to see what’s going to happen.”

It’s not just the Thai shrimp trade that’s eyeing the Middle East either. As previously reported by Undercurrent from the Thaifex show, tuna exports to the region are also up notably this year, according to Chanintr Chalisarapong, president of the Thai Tuna Industry Association

“They have to cover the stock of canned tuna for their people, because as you know there are many countries that are banning food exports — Thailand doesn’t have this policy, so we believe this year should be a very high percentage growth in the Middle East region.”